Gainesville was established as Mule Camp Springs by European-American settlers in the early 1800s. Less than three years after the organization of Hall County on December 15, 1818, Mule Camp Springs was renamed as Gainesville on April 21, 1821. It was named in honor of General Edmund P. Gaines,[6] a hero of the War of 1812 and a noted military surveyor and road-builder. Gainesville was selected by the legislature to be the county seat, and was chartered by the Georgia Legislature on November 30, 1821.

A gold rush that began in nearby Lumpkin County in the 1830s resulted in an increase in the number of settlers and the beginning of a business community. In the middle of the nineteenth century, Gainesville had two important events. In 1849, it became established as a resort center, with people attracted to the springs. In 1851, much of the small city was destroyed by fire.

After the American Civil War, Gainesville began to grow from 1870. In 1871 the Airline Railroad, later named the Georgia Southern Railroad, began to stop in Gainesville, increasing its ties to other markets and stimulating business and population. It grew from 1,000 in 1870, to over 5,000 by 1900.

By 1898, textile mills had become the primary driver of the economy, with the railroad integral to delivering raw cotton and carrying away the mills’ products. With the revenues generated by the mills, in 1902, Gainesville became the first city south of Baltimore to install street lamps. On March 1, 1905, free mail delivery began in Gainesville and on August 10, 1910 the US Gainesville post office was opened. On December 22, 1915 the city’s first skyscraper, the Jackson Building, had its formal opening. In 1919 Southern Bell made improvements to the phone system.

City services began in Gainesville on February 22, 1873 with the election of a City Marshal, followed by solid waste collection in 1874. In 1890, a bond issue to fund the waterworks was passed, and the original water distribution system was developed.

In 1943, at the height of World War II, Gainesville contributed to the war effort by leasing the airport to the US government for $1.00. The military used it as a Naval Air Station for training purposes. In 1947, the airport was returned to the City of Gainesville, improved by the addition of two 4,000 ft landing strips (one of which was later lengthened to 5,500 ft).

After World War II, a businessman named Jesse Jewell started the poultry industry in north Georgia. Chickens have since become the state’s largest agricultural crop. This $1 billion a year industry has given Gainesville the title “Poultry Capital of the World.”

In 1957, the U.S. Army Corps of Engineers constructed Lake Sidney Lanier, by constructing Buford Dam on the Chattahoochee River. The river also flows through Alabama and Florida. Named after an American poet, the lake is located along the border with Forsyth County, The manmade lake covers more than 38,000 acres and is a center of outdoor recreation. Not far from the major metropolitan area of Atlanta, Georgia, this is the most visited Corps-created lake in the nation. It has an economic impact of more than $2 billion annually.

During the 1996 Atlanta Olympics, Gainesville served as the venue for the rowing and kayaking medal competitions, which were staged on Lake Lanier.

Gainesville gained accreditation of its Parks and Recreation Department in 2001. This was the third department in the state to be accredited. The Lakeside Water Treatment Plant opened in 2002. The city has sponsored new social activities, including the Spring Chicken Festival in 2003, the Art in the Square gathering in 2004, and “Dredgefest” in 2008. 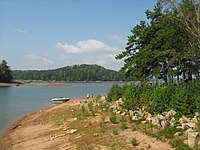 Nestled in the foothills of the Blue Ridge Mountains, parts of Gainesville lie along the shore of one of the nation’s most popular inland water destinations, Lake Lanier. Named after Georgia author and musician Sidney Lanier, the lake was created in 1956 when the U.S. Army Corps of Engineers dammed the Chattahoochee River near Buford, Georgia and flooded an Appalachian mountain valley. Although created primarily for hydroelectricity and flood control, it also serves as a reservoir providing water to the city of Atlanta. The lake is also a very popular recreational attraction for all of north Georgia.

Much of Gainesville is heavily wooded, with both deciduous and coniferous trees.

The poultry farming industry in Gainesville began to develop after World War II, when Jesse Jewell, a Gainesville feed salesman, began his business. The format he developed was to sell North Georgia farmers baby chicks and feed on credit. When the chicks were grown, Jewell would buy back the adult chickens (broilers) at a price that would cover his costs and guarantee farmers a profit. Once Jewell signed on enough farmers to produce broilers for him, he invested in his own processing plant and hatchery.[8]

As of 2013, poultry farming remains a significant economic driver in Gainesville, representing six of its top ten employers (7,600 employees), nearly one-quarter of the total population in the city in 2010 (and a higher proportion of working-age population.)[9] It is most well-known business in the area, with statewide revenue exceeding $3 billion. These jobs have attracted numerous Hispanic workers, adding to the diversity of families in the city and county. The proportion of Hispanic and Latino residents is more than 40 percent of the city’s population, where the jobs are.

According to Gainesville’s 2012 Comprehensive Annual Financial Report,[11] the top employers in the city are:

Gainesville has a subtropical climate with mild, yet extremely varying[12] winters and very hot summers.

Winters are generally mild, with average temperature highs in the high 40s to mid 50s and lows in the low to mid 30s. However, temperatures can swing up and down in days, often one after another, since cold fronts and warm fronts visit frequently. It is not uncommon to see 70s for highs two days and temperatures in the teens for lows the next. Annual snowfall only yields an average of 1 inch, and accumulations for more than a day are rare.[13] Gainesville is located in USDA Hardiness Zone 8a, enabling hardy palm trees and cacti to withstand frigid nights. The record low temperature (-14 °F) was recorded in January 1985.

Spring sees highs in the 70s and 80s with lows in the 40s and 50s although March is the wettest month of the year on average.

Summer heat can be intense, but generally highs are in the mid to upper 80s. Gainesville’s altitude shaves a few degrees off the summer heat. The area is extremely humid, and the heat index can reach the 100s. The record high (107 °F) was recorded in June and July 1952.

Fall has temperatures similar to spring but with much less humidity, especially later in the season. In late October to November the leaves are in the midst of changing colors to brilliant reds, yellows, golden oranges and purples.

While Gainesville does not sit in Tornado Alley, a region of the United States where severe weather is common, Supercell thunderstorms can sweep through any time between March and November, being primarily concentrated in the spring. Tornado watches are frequent in the spring and summer, with a warning appearing at least biannually, occasionally with more than one per year.

Tornado activity in the Gainesville area is above Georgia state average and is 108% greater than the overall U.S. average.

Gainesville also has a bus transit system, the Red Rabbit, that has 130 stops along three routes through Gainesville.[21] The Red Rabbit Public Transportation System began its operations in January 2001 with three buses and four mini-buses.[22]

Lee Arrendale State Prison of the Georgia Department of Corrections is a women’s prison located in unincorporated Habersham County, near Alto,[24] and in the Gainesville area.[25]

The Public Defender’s Office at Gainesville has been recognized as one of the best in the state of Georgia. Established in 2005, the office provides representation for persons accused of felony offenses in Hall County.[32] Attorneys from the office have been recognized for their community involvement, as well as for their acumen in the courtroom.[33] In 2008, a first-year attorney successfully challenged the Sex Offender Registration Law in the Georgia Supreme Court.[34]

The number of full-time law enforcement employees in 2011, including police officers, was 108, with 95 being officers. Gainesville is on par with the state of Georgia in general with 2.77 officers per 1,000 residents.[31]